When you look at the life of Tony Caldwell, the term “renaissance man” comes to mind. In addition to building OAA into one of the largest regional insurance distributors, and his reputation as a business and insurance industry thought leader, he’s a serial entrepreneur, writer, mentor, children's advocate, outdoorsman and pilot, as well as a man deeply involved in his community.

While he may not have become a minister, Tony’s certainly an evangelist for insurance agent independence.

It’s striking that OAA employees and members all talk about “dreams.” This is a core value for Tony and OAA.

Helping independent agents reach their goals is fun and enormously satisfying. I like to think of us as a dream factory.

To that end, Tony and his employees have helped independent agents create over 250 independent insurance agencies, making OAA one of the U.S.'s largest regional insurance distributors with over $700 million in premiums, and the number one ranked Strategic Master Agency of SIAA for the last 5 years with 185 insurance agency partners. He’s also led to OAA’s recognition for the third year in a row as one of Oklahoma City's fastest growing businesses.

As seen in Insurance Business America 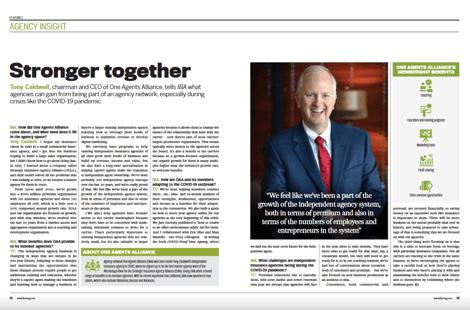 Most recently, OAA was named one of Oklahoma's 25 Best Companies to Work for. Tony is generous in sharing his insights and talents through bestselling books – including #1 Amazon New Release, The UnCaptive Agent – and free mediums.

In his spare time, Tony enjoys time with his family. He’s also an active outdoorsman and instrument-rated commercial pilot. Flying is a particular pleasure. “It’s enormously satisfying on every level. I love seeing the ground from up high, and flying demands great physical skill and a lot of concentration.”

Tony and his family are members of Crossings Community Church.