A business contract is good, but trust is better

I seem to be eaten up with Frankie Valli and the Four Seasons lately. I hope you've gotten to see the new movie "Jersey Boys" about their story this summer. The movie was released in 2014, directed by Clint Eastwood no less! I've seen it twice, and just saw the musical last week in Las Vegas. I've been accused of being obsessive compulsive before, and this behavior might seem to support that, but really I just love the music and like the story!

Anyway, as I sit here writing this post and listening to the Four Seasons’ greatest hits, I'm reminded of the scene in the movie where Frankie and Bob Gaudio make a deal to combine their talents and form a partnership. Bob says to Frankie: "Should we get a lawyer to draw up a contract?" To which Frankie replies, while offering his hand, "I'll give you a contract - a New Jersey contract."

This is my favorite part of the movie!

Here are two guys whose word is their bond. Two honest people who mean, and do, what they say. And it worked! At the end of the movie the point was made that over forty years later, through thick and thin (and there was a lot of both), their partnership, based on a handshake, was sound. 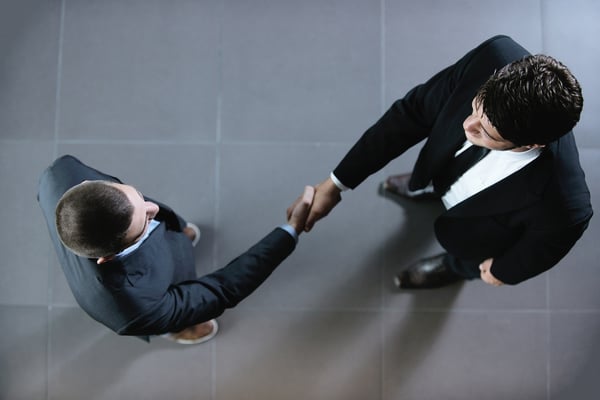 I like this part of the story. Those of us who work in insurance know we are in the partnership business, and I have a lot of partners in real estate, legal services, insurance... Most of them are like Frankie and Bob: guys who can be counted on. Who keep their word. Who do what they say. People for whom a handshake would be good enough.

You could engage a law firm to start writing all types of contracts, each of which follows state laws and is legally binding, outlines all terms and conditions, includes details on written form, and is the most valid contract that a business attorney has ever seen. But if there is no relationship and no trust, then customers will not sign it.

On the other hand, if your clients know you and trust you, and you still run a small business, you may get away with a contract template instead of writing a contract with legal representation for each client, and that contract will be enough. It is always a good idea to seek legal advice and make sure that you’re doing the right thing as a business owner, but once again, the contract will not create the relationship and the trust - it’s just a backup for everyone.

In my work, we do use a written contract, because it makes people feel better. But you can't put on paper, in a formal "contract" anything that is more meaningful to me than what I always hope to express in a handshake.

Make a point of building trust as you build your brand. Make sure your word is gold and that everyone who deals with you and your agency goes away feeling that your handshake would have sufficed, and that you keep every single promise you make.

At the same time, do not promise something you are not sure you can deliver. Setting realistic expectations may not secure a quick sale, but you will be doing real business with integrity, which is more valuable. Don’t worry about your clients being “stolen” by someone who is promising them the moon and stars for less money - you know they can’t deliver, and you know the clients will come back to you after they discover the hard reality… because you were upfront and told them the truth even if it meant the sale would be more difficult.

The world may have changed from the 1960's when Frankie and Bob first shook hands. But I'm a believer. The "New Jersey Contract" is the best kind there is!