Insurance agency profitability is not where you think

You may have seen a post making its rounds on social media that talks about how the allies mapped bullet holes in airplanes returning from bombing runs in Germany. The theory was that, by reinforcing the areas where there were holes in the planes, they would make the planes stronger and better able to withstand damage.

Abraham Wald, a mathematician, had a very different theory: he suggested that planes returning from combat with holes in them be reinforced in the areas where there were no holes. His point was that the airplanes that were returning did so because they had damage in places that weren't critical.

According to the article’s author, Linney E. Dew II, this phenomenon is called survival deviation. It happens when you look at things that have survived when you should focus on things that don't. As I read this story, I realized that we often do the wrong thing for the right reasons in business. This is true in any line of business, but I've identified several instances where this applies to decisions that insurance agents and insurance brokers make routinely. Let's take a look at those. 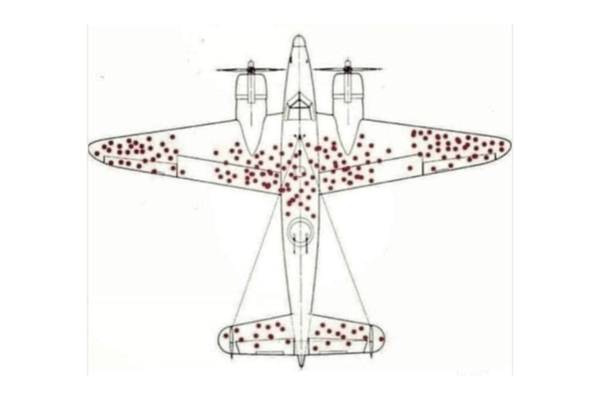 Every independent insurance agency is in business to make a profit. When you're reviewing your financial statements, and you realize that the profitability of your agency isn't what you had planned or hoped for, what do you do? What I find is that most agency owners go to work to beef up their marketing in order to drive additional sales revenue into the agency, regardless of whether they deal in commercial lines, life insurance, or property and casualty.

While that strategy does work, and long term organic growth and business increase is always desirable, it ignores an area that will produce far more reliable results over time and more quickly: reducing expenses.

If the agency's desired profit margin is 20%, then it takes an increase of $5 in revenue to drive the same dollar of profit to the bottom line as $1 of expense reductions. So, when an agency needs or wants to increase or generate profitability, the first place to look is the expense side of the profit and loss statement. In every agency I have ever looked at, there are plenty of places where expenses can be reduced without cutting into customer service or new business activities, which will immediately impact and benefit your basic financial metric: earnings before interest, taxes, depreciation, and amortization (EBITDA). If you ever consider selling your agency as part of a mergers and acquisitions move, you will be glad to have a higher EBITDA.

Something that I see new agency owners doing regularly is hiring salespeople to continue to grow revenue before they have built a strong service team. This usually happens because, as the agency grows, the owner who is the primary salesperson is spending more and more of their time on service-related and administrative tasks and has less time to sell insurance. The answer seems obvious - hire more salespeople. But the truth is that the best salesperson in any insurance agency is usually the owner.

If the owner hired service people to take all service work off of their plate, they would have more time to continue to grow revenue through their sales capabilities.

This phenomenon also happens in existing insurance agencies. The key here is that often more salespeople aren't necessary. What instead would work better is to free up the salespeople you already have from every non-sales task that they are now performing.

I often find that agency owners see new business as the answer to both increasing income and profitability. While it's undeniable that new business production is important for any growth-oriented organization, I would argue that paying attention to the agency’s retention rate is more important. But this is exactly opposite of what I see most agencies doing. If the agency's retention rate is 80%, then to grow 10% a year the agency has to sell 30% of new business.

That's virtually impossible to do consistently. But if efforts are made to drive retention to 95% then a 10% growth rate is much more doable. It's not obvious, but retention is the first thing to focus on for driving increased revenue results.

The average agency in the United States only sells 1.6 policies to each of its clients, and it's clear that every business and every personal insurance client buys more on average than 1.6 policies. If the agency focuses on well-rounded accounts and selling every policy the client needs, not only will top-line revenue grow faster than it will if the agency focuses on new clients, but retention will also increase and bottom line profits will go up as well. A bigger book of business doesn’t have to have more clients in it - just more policies. 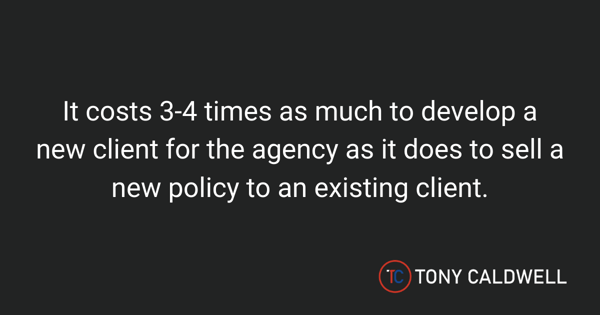 Get your team aligned

Most independent insurance agents and agency owners understand that it makes more financial sense for them to focus on writing business with their key insurance carriers. This is true because these carriers often pay higher commissions and fees, and offer better profit sharing to the agency.

Yet, owners remain frustrated that their employees sell policies with other carriers. Often, the reason for this is that the other carrier is cheaper or easier to use. This results in the employees of the agency and the agency owner not having the same goals, and not being incentivized in the same way.

When agency employees are paid in a way that reflects the rewards to the agency, that behavior does change and the agency's growth at the top and bottom line accelerates. It may take a little extra work to set up in your agency management system, but I recommend that you pay a different commission rate, new and renewal, for every carrier and every product that you sell.

The Allies won World War II because they did a lot of things right. No one thing created their victory. No one tactic, or strategy, results in an insurance agency that is the envy of its peers in both its top and bottom line. Success requires a variety of strategies.