Leave Your Best Bait on the Bank

I just wasn’t very good! And it was frustrating. I liked to fish with friends. But my friends always caught more fish than me.  Also, they caught bigger fish than I did. And they caught them on every kind of bait you can imagine.

I had tackle boxes full of baits. I had every new and shiny bait ever designed. But I couldn’t catch much with any of them!

Now, I was a good worm fisherman. I could, in fact, catch fish pretty well with worms. The problem was that fish didn’t always seem to want to eat worms. And when they didn’t want to eat worms I was not successful.

In an effort to become a better fisherman I tried lots of “techniques.” I read lots of magazines and books.  In short, I became a student of fishing.  I looked for the “secrets” to being a successful fisherman everywhere.  But, I was not a “successful” fisherman. 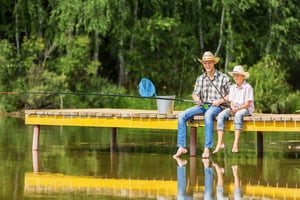 One day I heard a fellow who had just won the Bass Master Classic (the World Series of Bass fishing) say that to become a better fisherman you should leave your best rod and bait on the bank.  In other words, only fish with those things you were not good at using. He said that would make you a better fisherman.

I decided to try his advice and I removed every worm and worm rod from the boat.  I decided to fish just with something called a spinner bait.  Well, I fished with spinner baits a lot. Every week. Dawn to dusk. No fish.

Then, something interesting happened. I caught one!  Then another! And another!  And, finally, a bunch of fish were in the livewell. I could catch fish with something besides a worm!

So, I repeated the experiment with crank baits. I had exactly the same results!

What’s the moral of the story, you ask? It is simply this: As insurance agents, we are fishermen. If we want to be really good at it we have to leave our best bait on the bank. We have to be willing to risk trying with something new until we’re successful. I have no formula in this post, just an idea – one that has worked for me over the years as an agent and as a fisherman!