Lessons from My Father

Today would have been my father’s 95th birthday.  He was a successful entrepreneur and the son and grandson of entrepreneurs. As I reflected on his life today, I thought about some of the things he taught me. 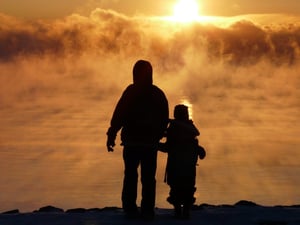 Dad had a worn, dog eared ledger book in his desk drawer, which I still have. All his investments and his business positions were carefully there.  He always knew where he was. I often talk to fledgling business owners who have no idea of their financial position, don’t understand the difference between profits and cash, and are just one step away from making serious business mistakes. It’s vitally important to know where you are.

As a boy I often spent time at my father’s office, late at night, while he worked.  That wasn’t much fun, I’ll admit!  But, the lesson of hard work, long hours, and determination is a valuable one.  Dad worked until he passed away at 81, full of optimism about the business and his progress, but also hard at work.  I know almost no one who has become successful, and then maintained that success, without putting in long hours. Dad was a great example of that.

My father’s first business was very successful for several years until circumstances beyond his control caused bankruptcy.  Most people after failure give up.  Dad started another business and worked hard for years to get back where he had been before.  Grit is an indispensable ingredient in success, and I learned that as Dad taught it to me by example.

Dad hated his bankruptcy and was determined to pay every one of his creditors back, even though he wasn’t legally obligated.  He understood that his own integrity, honesty and self-respect were critical.  He couldn’t become successful again without those key assets.  Dad had to force a local bank to accept repayment for a debt written off.  But, he was bankable as a result.  I learned integrity and honesty are worth more to a businessman than a strong balance sheet and positive cash flow.  He taught me to, “do what you say you’re going to do.”

He valued his independence and wanted to control his own future, even if it meant hardship.  I grew up thinking there is no better way, and I find that this value is a common thread in all of those who build their own success through entrepreneurship.

As a boy, we lived for a number of years with no furniture in our house.  We literally sat, ate, and slept on the floor.  The new business didn’t generate enough money for such luxuries for a long time.  I learned that you feed the business first and that you must be willing to sacrifice to be successful building your own company.  Most people look at the end result of success and the perks that brings. They aren’t much interested in the truth of the journey’s struggles, but I learned from my father that they are necessary – and worth it.

There are many other lessons to be sure, but I think all of these have value, and relevance to all of us who are building companies.  Thanks, Dad.