Name it and Claim it!

I am told fairly often why someone cannot do something. I always find this frustrating because I realize that the person telling me this is right. They can’t! On the other hand I have learned that when I decide I want to do something it invariably happens. Let’s explore the difference.

In my experience when you tell yourself, or others, that you can’t do something you begin to marshal all the forces of the universe to make your vision of the future – which is negative – come true. Think about it. When you tell yourself you can’t don’t you immediately list the reasons why? This is normal, even natural. But what happens when you do this is that your mind begins to focus on the negative, the obstacle, the impossibility – and then your subconscious begins to put in place the very things you have predicted. 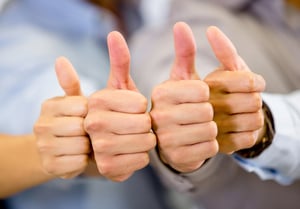 In my conversations with successful entrepreneurs I have discovered one consistent attribute that stands in opposition to this phenomenon. Unbridled optimism! Just this past week I had two separate conversations where I was told “when I set a goal it always happens”. I have had the same experience over and over again myself. What’s the difference?

I believe that when you envision something, decide you want it and commit to doing it that you begin to organize everything and everyone around you to make it happen. You begin to see possibilities for success instead of failure. Your mind begins to creatively solve the problems that stand in your way. You begin to see things you never saw before that can help you reach your goal. You become far less easily dissuaded or discouraged when you have set backs. Things seem to just work themselves out!

I also believe that people often kill their dreams, their goals, and their desires before they ever start because they have believed the lie that there is something wrong with wanting something. Think about this – it’s very important. When you tell someone you want something do you generally get the question “why?” in return? Of course. What is your typical response? Most immediately answer the question in an effort to justify their wants. Psychologically, they are telling themselves they aren’t worthy – and they are doomed to failure – as they begin the negative processes of rounding up the reasons why they can’t have what they want.

Dan Sullivan of The Strategic Coach advises his clients to just want something because they want it with no attempt at justification. I agree with him that there is nothing wrong with this. And in my experience the wanting is the beginning of achievement.

You can do anything you really want to do. You just have to want it enough for all the forces of the universe to align with you. They will. In my experience they do – every time.