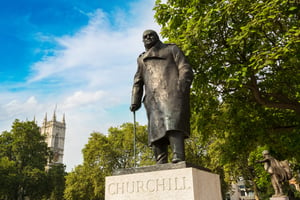 I recently watched a terrific movie about the beginning of World War II entitled, “Darkest Hour.” The movie features the tremendous challenges faced by Britain and its new Prime Minister, Winston Churchill. It opens with Churchill after twenty years of being out of power as a result of the Gallipoli disaster in World War I. He is immediately faced with the collapse of Europe, the imminent defeat of France, 300,000 British soldiers trapped on the beach at Dunkirk, a King and Cabinet that despised him and defeatist attitudes on the part of virtually the entire population and politicians. All of this and many other urgent and difficult problems. What a way to start!

In one early scene, Churchill is in the toilet talking to, well, begging really, President Roosevelt for any kind of help. It is a pitiful thing to watch and shows how truly desperate and despondent Churchill was.

How did he get from there, to the defiant radio speech where he vowed to, “never surrender?”

He did it by recalling that Britain, in its 1,000-year history, had never given up before. He got there from developing a resolve that regardless of the outcome, Britain would only move forward and that defeat was preferable to surrender.

It’s now the middle of the year and for many businesses, it is time for decision making. The year is not working out as planned. Sales are not what they need to be. Income is tight. New employees have not been hired. Bills cannot be paid. Carriers are demanding more than can be provided. Other problems, small and large, loom and the end of the year does not look the same from here as it did in January.

What should the business owner do?

There are only two choices. Fight on, never give up and work to correct the problems that arise is one choice. Accepting a lesser fate, as Neville Chamberlain and Viscount Halifax would have, is the other.

Churchill’s case is instructive for the business owner. He made the choice not to accept defeat and to fight. This led to creativity and solutions to the many problems he faced. He organized a fleet of boats to rescue his army, the U.S. provided help and his team (the cabinet, Parliament, and people) rose to meet the challenges with him. While the war didn't end that year, progress was made, and supremely important, the groundwork was laid for an ultimate victory.

How will you decide, at the midpoint of the year, to finish? Will you give in and give up? Or will you work even harder to carry the day? Churchill’s answer to his people is inspiring. You can read it here: https://winstonchurchill.org/resources/speeches/1940-the-finest-hour/we-shall-fight-on-the-beaches/