How do you know when you’re going to be successful?

I remember when I started my career as an insurance agency owner and commercial insurance producer.  Each month I called on an endless succession of business owners asking for X dates and it seemed like forever before I got to actually quote.  Then I sold a few policies and could begin to see that I’d eventually have some income.  I remember going home and telling my wife we had victories to celebrate!  Nursing an infant, working full time in her own business and exhausted her question was “where’s the check?”

It’s really tough to start and build a business.  Most people can’t do it.  But those that do have something highly unusual going for them.  Persistence.  They simply won’t quit.

I saw the movie “Founder” last week about Ray Kroc and the building of McDonalds.  It was inspirational to me.  Ray was an entrepreneur who started, and apparently failed, at a lot of things.  Early in the movie we see him carting a mixer from drive in to drive in with little success.  Each night he is staying in a flea bag motel, alone with nothing more than Canadian Club whiskey for company. 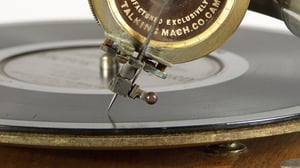 He also had a record player, with a single record about persistence.  As he falls asleep each night the voice quotes Calvin Coolidge saying:

“Nothing in the world can take the place of persistence.  Talent will not; nothing is more common than unsuccessful people with talent.   Genius will not; unrewarded genius is almost a proverb.  Education will not; the world is full of educated derelicts.  Persistence and determination alone are omnipotent.”

Kroc of course goes on to build McDonald’s into the world’s largest restaurant chain and becomes fabulously wealthy.  At the end of the movie he rehearses a speech about what made him, and his company, successful.  He begins “Nothing in the world can take the place of persistence…”

How can you know you’re going to be successful?  By making the commitment to never give up!