The Greatest Investment Ever

Not long ago my 21-year-old son reminded me of a time when he was 11 that he advised me to buy stock in Apple Corp.  I remember when we had that conversation a decade ago. I thought Apple had already had a great run and its future wasn’t as full of investment promise as its past.  So, I didn’t invest.

I’m sure many people have had similar experiences. The reflection often begins with “if only…” and ends with wistful disappointment at our own inability to see the future and act on it.

I find that business people, as a rule, fail to invest in themselves.  Perhaps for the same reason I failed to invest in Apple – because they don’t see the potential return.  Or perhaps because they think it’s unnecessary.  Even people who spend large sums training their work force often refuse to take more than the required education themselves.

This is a tragic mistake in my view. 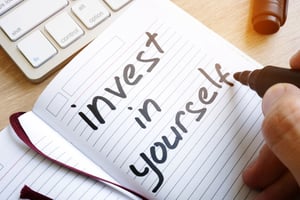 Looking back, I find that I am my company’s most valuable asset.  After all, I started it and have propelled the company forward with vision, leadership, hard work, investment and risk taking.  Isn’t that true of your business?

I also think I’m either my company’s biggest limitation, in terms of its future, or its largest opportunity for continued growth.  Since I believe that about me (and I believe it about you too, by the way) becoming my absolute best and continually improving my own knowledge, capabilities and performance is worth time, effort and investment.

I find that the entrepreneurs who are involved in training, coaching or other self-improvement programs are the ones who seem to be making continual progress.  The ones I’ve met that I most admire seem to be involved in multiple opportunities for learning and personal development.

Years ago, at a conference, I met a man who had grown his income ten times in only a few years.  He gave credit to Strategic Coach for the learning that allowed his progress.  Someone asked him, “how much does it cost?” To which he replied, “I don’t know, and I don’t care!”  His essential point was that he understood the program cost wasn’t the important thing, it was what he gained from it as a return on his investment that mattered.  That conversation led to my own involvement in Strategic Coach, which in turn has helped me grow my business and my income tremendously.

There are many coaching and training programs for entrepreneurs available.  Many seem expensive if you only consider the cost, but when you understand the potential return, due to increasing your own performance, they are the best investments you can make.  They are investments in you!