All of us who are professional salespeople learned our craft over many years working in various sales teams. Some, like me, began learning it at a very early age.

You’re never too young or inexperienced to sell

My first sales job was as a Boy Scout selling Scout-a-Rama tickets and later light bulbs to fund my summer camps.

I was excited to always be a sales leader in my troop, and I think the primary reason that was true, is because I never missed a sales meeting. As a group, we had several opportunities a week to go door to door. While most of my friends only signed up for once or twice a week, I was there three or four days a week.

The first secret of sales success I learned is: get as many at-bats as possible.

Some of the best on-the-job sales training I ever got was as a waiter during high school and college. The two restaurants I worked for were both steak houses, which in my part of the country are a dime a dozen. In other words, a steak dinner is nothing but a commodity. So, to maximize my tips, which at one level or another are always a function of the check price, I learned to do two things.

The first thing I learned was that the bigger that check was the more money I made on any given table. I was highly incentivized to run up the bill. In order to do that, I learned to sell as many extra products like bottles of wine or dessert to every table I waited on.

So, the first sales lesson I learned as a waiter is that bigger sales make you more money. The same thing is true in the insurance business. If someone is already buying insurance from you, round their account with other types of coverage:

Customer service and experience is key

The other thing I learned as a waiter though is less obvious. What I learned was, if I was selling a commodity, like a steak dinner, the best opportunity to drive my income up was to create an incredible experience for the customer.

This is an area where I think most insurance people could stand to improve.

Here are some ideas: Take a look at your proposal. Is it like most: black, white, and boring? Or do you liven up every proposal with graphics, photographs, color, different font sizes? 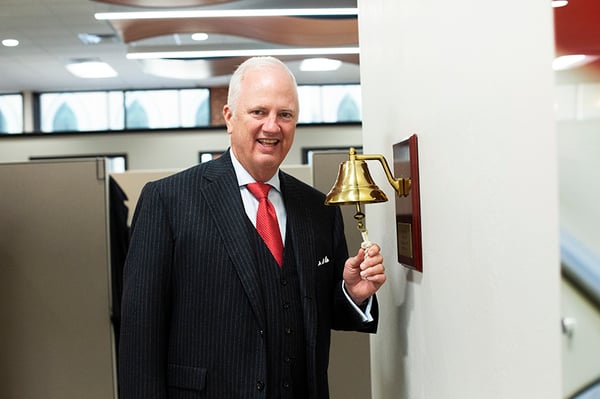 Have you considered videotaping your proposals, so that you have an opportunity to sell, rather than emailing a document to someone who will immediately go to the last page to look at the price? With video, you can do an incredible presentation about how you're addressing fear and risk and other things that people care about, and they have to wait until the end to get the price. Not only did you make all your points, but you did it in a memorable way. That's why video is so important.

Or have you found other ways to be memorable? There are many ways to insert showmanship and points of differentiation in insurance proposals. Very few agents who call themselves sales professionals make the effort. Those that do tend to have a much higher income.

Another way to add to the experience of buying from you is to introduce and highlight your team. This tells the prospect that they have an entire organization taking care of them and solving their pain points, instead of one person. That's memorable.

There are endless ways that you can go about creating something that is an experience that is both memorable and enjoyable for prospects and clients. It just takes a little imagination and a little effort. As I learned as a waiter, it can mean a difference of 100 to 400% additional income. It really is true that the sizzle sells the steak.

The sales process can take long. Stick with it.

Early in my business career, I was a partner in a property management company. The only way I was going to make a living was by increasing our business: I had to convince property owners to give me their properties to manage or I wasn't going to eat. I had several prospects and one client who controlled large portfolios of apartment complexes, and I wanted their business. So I found a way to call their decision-makers Every. Single. Week.

"I was so persistent that their employees often wouldn't pass on my messages. They wouldn't take my sales calls. I found ways to run into them at their favorite restaurants, civic events, and other places. I made it a game."

With one client, I used to call and say, “I'm making my weekly call to check in, see how you're doing and ask if I can have more of your business”.Eventually, I got the largest account of my career… after at least 75 weekly calls.

What I learned in this early experience was that persistence pays off. There are numerous studies that show that on a normal sales cycle, the average buyer only buys after the salesperson asks for the order seven or more times, but most sales reps only ask once or twice. The difference between mediocrity and superstardom is just five more asks. Persistence is a huge key to long-term sales success.

Unfortunately, many experienced agents today are less successful than they could be, because they focus their selling efforts on price and they don’t feel comfortable asking for the sale.

When I was 13 years old, I bought a key machine and cut keys for new apartment complexes that were being built in my community. Like many people in business, I got my first break from a relative: my father gave me a job. After that, it was up to me to pedal my bike around town, knock on construction trailers and try to convince superintendents that they should trust a 13-year-old kid with their locksmith work instead of an established business in town. Talk about interesting cold calls!

One advantage I had was because of my (lack of) overhead, I could charge less, and this is how I learned very quickly that price only sells a small percentage of work. What really sells - with a very high percentage of success -  is referrals.

I started asking every customer to give me a letter of recommendation. Pretty soon when I knocked on the trailer door at a job site, the first words out of my mouth after introducing myself were, “I want to show you letters from my raving fans about the quality of work that I do”. After that, I quickly had all of the key cutting work I could handle as a 13-year-old.

The second lesson was that price is important, but it's not enough. Referrals from satisfied customers, as well as the experience created with quality, timeliness, and excellent service, create a lot of sales opportunities. I learned the incredible power of endorsement.

Later on, when I began my insurance career, I created three programs with endorsements to begin to build my business, and I found that it worked just as well as it had when I was 13 years old.

Another thing I learned is a 13-year-old key cutter was that a guarantee that you actually stood behind was an invaluable deal closer. My guarantee was simple: “If I cut a key that doesn't work, I'll cut six that do”. I had to make good on that guarantee from time to time, despite my best efforts, because sometimes things just don't work.

"I'll make you this guarantee myself: If you create an effective guarantee, your sales will go up."

Another secret of sales success I learned in my first job after college. I was a salesperson in a computer store. Our business was like many retail insurance agents: we waited in the store until somebody showed up that we could sell something to. One day, while perusing an early version of email, I saw a note that said that General Electric in Schenectady, New York - half a country away from where I worked - wanted to buy IBM XD computers. I asked my boss, the sales manager, if he thought I should give them a call and he told me, “No, I don't think you'll have much chance”.

I decided to try anyway... and I became the number one supplier of IBM computers to General Electric Corporation at full retail, cash on delivery. No terms.

No one could believe I'd pull this off, but I did, by simply making the effort. I learned a couple of lessons from this. The first is, it doesn't matter how big a company you work for, you can do business with the biggest companies in the world if you're willing to try.

The second lesson I learned is, that anytime you have a good idea, or you want to try something out of the norm, there'll be someone perfectly willing to tell you that it can't be done. If you learn to listen to those people, you'll never accomplish anything, but if you ignore them and try anyway, you might just win.

The third lesson I learned was that it's actually easier to sell a lot of product to one customer than it is to sell lots of small products to many smaller customers - those who go after big fish catch big fish. It just isn't that hard. But this is something that most insurance agency owners that I know, are afraid to try. Someone in their past, or they themselves, have convinced them that they can't. I learned not to listen to those messages.

These are just a few things that I learned as a 10-year-old boy scout, a 13-year-old kid on a bike, a wet-behind-the-ears computer salesman, and as a long-haired waiter, that have brought me a lot of success, and made a lot of money for me as an insurance agent.

Think back to your experiences. What have you learned so far in your career that you could put to work, improving your results as an insurance agent? Mine are:

I'd love for you to share your secrets to sales success with me. You can reach me at tonyc@oneagentsalliance.net.